The first doctor I saw was a colleague, actually. I told him that I’d broken up with a serious boyfriend, quit graduate school, moved 2,000 miles, and didn’t know anyone where I was living. He thought it was reasonable that I was depressed. Those things would significantly impact my GAF score. Global Assessment of Functioning.

I hoped that given enough time for the medication to kick in, taking a shower wouldn’t seem exhausting. That getting out of the chair where I’d been sitting, staring at the spray of dust that danced in the afternoon sun, wouldn’t seem insurmountable. Just. Get. Up.

A few months in, I felt better, but then came the 3 a.m. panic: What if my dad drops dead from a heart attack? What if my mom gets mugged when she’s out for a walk? What if people find out that I’m a complete fraud? What if someone actually gets to know me? I can’t live up to my wardrobe.

“Prozac seems to work very well for my patients who straddle anxiety and depression.”

I knew the rhetoric: It’s not an exact science. Sometimes it takes a while to find the right medication.

My first experiments with psychotropic meds were in the early 1990s. Prior to then, I might have been stuck with Elavil or one of the other tricyclic antidepressants that would have had me smacking my lips and blinking off to the side.

Decreased sex drive wasn’t so bad a fate given that I wouldn’t know the difference.

Several years into the medication hamster wheel, my psychologist suggested that I see a new psychiatrist, who said that she’d like to see me try a mood stabilizer. See if that didn’t make a difference. I did. It did. It wasn’t like before, when I’d noticed incremental improvements until the improvement began to stutter. I felt okay. Not just okay, but really okay. Not anxious, not weepy, and not teetering. Not depressed. But I developed horrible freeway driving anxiety. Surface streets were a welcome trade for feeling okay.

Just over a year of being okay, I lost my health insurance. This particular cocktail without insurance would cost over $1,400 a month. The withdrawal, even with a step-down transition, taught me the meaning of despair. My husband, who was my new boyfriend at the time, took time off work to sit with me so that I couldn’t kill myself. Sure, there had been times that I wished I was dead, but this time, the wish evolved into plan.

It was back to Prozac and Wellbutrin, not because it was a magic potion, but because the generics are cheap. And I could function.

I saw a comprehensive internal medicine specialist, not a psychiatrist. She talked to me for two hours before she did anything, unlike the magnanimous 20-minute diagnostic assessments that the psychiatrists did. She asked me about my parents, my grandparents, my aunts, uncles, siblings. She asked about the traumas in my life and how I responded. She asked what I ate, how I slept, what I did to pass time. She understood that I considered it a good day if my head skimmed just below the surface of the water. She took vials and vials of blood.

“I believe you’re on the spectrum.”

“What does that mean?”

“On the spectrum of bipolar illness.”

“I’ve never had a manic episode in my life.”

“No, you’re what’s called unipolar. Anxiety and agitation are what your mania looks and feels like.”

I’ve read books, watched news shows, movies, and documentaries about life on the spectrum: the genius, the unbridled creativity, and electric energy that can characterize bipolar disorder. I didn’t get that brand. I don’t have the desire to drop what I’m doing and bicycle to Canada right this second. I can’t write a novel from start to finish in a single, fevered sitting that stretches on for a week. I don’t buy Chanel handbags and Manolo Blahnik shoes on a credit card. I don’t quit my job because life is just super and it’s a bore to work all day when I could be doing something super. “Touched with Fire” is the euphemism one author ascribed to mania.

I hate the way this illness is both romanticized and vilified.

And I hate calling what I have an illness—it’s fraught with all sorts of crazy that I’m not eager to hang out with. Illness should be a word reserved for cancer or lupus or some other horrible thing, but bipolar illness is an illness. Most people who commit suicide, not cutters, but the ones who hang or shoot themselves, take a long walk off a short pier—all bipolar.

There is a ton of research that predicts consecutive multiple med trials, intermingled with every different fashion of therapy, including electro-convulsive shock therapy (yes, they still do that) and the added burden of stigma and shame, all to no avail. The likelihood of getting to baseline quickly—three to six months after beginning or changing medication—is extremely low. So when I feel myself gaining purchase toward the bottom, I know panic and hopelessness are waiting to catch me. What if the concept of “sustained baseline” is little more than pretty prose?

Unlike major depression, where most people resume baseline after 6–12 months with or without medication, or for whom medication is temporary, bipolar illness carves out a space, gets comfortable, and orders cable.

Mood stabilizers, and most recently, an anti-seizure medication, have helped me to understand baseline. Baseline is being frustrated by traffic, not enraged. It’s grieving for my mom, not being incapacitated. It’s being able to embrace joy, but avoiding the precipice when the light inevitably dims.

Baseline is the threadbare sweatshirt you’re willing to wear to the grocery store. It’s comfortable shoes that only sometimes give you blisters. Baseline is good.

But the fear is permanent, just like the illness. Is a case of jitters a sign that full-blown agitation is on its way? Is this a case of the blues or an “episode” in the making? Are my worries legitimate, or is this free-floating anxiety?

Breathe, meditate, avoid sugar and gluten. Limit alcohol and caffeine. No diet soda. Go to bed at the same time each night and get enough rest. Exercise for at least 20 minutes a day. Yoga seems more doable than spinning or some other awful torture. I pray that the coming weeks will not yield data points toward “episode.” Hope, plead, bargain, implore that baseline is never so far away that I’ll run out of supplies while en route. 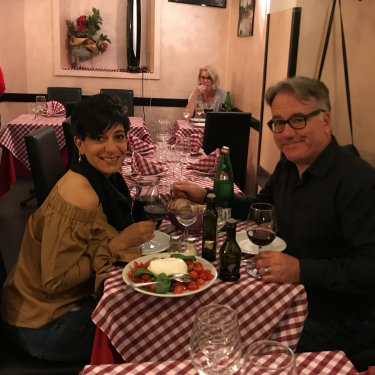 J.M. has worked in social services, academia, and arts for over 20 years. Literature and cooking share equal real estate in her yard of passions, and she believes that both words and food have the power to transform lives. She lives with her husband and a beloved, if surly, old cat.