In the face of injustice, your act of speaking up is as political as remaining quiet. Someone told me this a while ago. It precisely sums up why all of it started.

Growing up wasn’t all that bad for me. I was always taught to be self-sufficient, independent, and ambitious. Never once were marriage or domestic chores or stereotyped behavior patterns drilled into my head. I have been so fortunate to have such a familial environment while growing up. But that also made me realize, being in a state of privilege, it is even more important to speak up for the ones who aren’t in the right conditions—for the ones who can’t find that voice inside their head that asks them to break away from their unjust circumstances.

I have always been a very sensitive person. I am not sure my 11-year-old self exactly understood what rape meant but I cried constantly for two hours straight upon hearing that detailed description of brutality of the 2012 Delhi gang rape. The chaos of the thoughts in my head in that instant cannot be expressed in words. That was the first time I realized that if an injustice occurred somewhere far away from my cushioned life, I could still feel that pang of helplessness in my heart.

As days and years passed, it seemed that the number of such dreadful instances in every corner of my country multiplied. I knew that just sitting back and watching was not something I could afford to do. Rohtak, Assam, Kerala, Mumbai, Jammu, Bengal…the names and locations changed, but the description of the brutality was the same. Their faces looked alike. Then, slowly it wasn’t them anymore. It became us.

As I stepped into my teens, I began to recognize my vulnerabilities. At every instant, the thought rang in my head: What if it had been me? That is exactly what the women of my country go through. There isn’t an ounce of exaggeration in that.

All of it was piling up in my head. With each passing day, I was constantly looking for a medium to vent on. I was looking for a way to channel my thoughts so they’d be productive for others.

It started with an Instagram page, opened the day Trump took office. It was exactly two years ago. I absolutely had no idea that this day’s random decision would lead to something so significant in my life. The best thing that happened was to be able to connect to people across the globe. Ecuador, Poland, Geneva, Australia, and places across India. I got tons of stories from people across the world. Stories that connected me to them.

Religious, cultural, or geographic, none of the differences even mattered. The stories of our fights and battles and our dreams and aspirations were so alike, yet different. So, I decided to start my blog to tell such stories.

I started off with women’s rights as my sole agenda, but it is because of the wonderful conversations I had with so many beautiful people that I slowly became a queer rights advocate, as well. This blog has not only been a medium for educating others and spreading awareness. It has been a constant process of growth for me, for educating myself.

I have studied and learned so much about trans-sexuality, gender fluidity, intersectionality in feminism, and things that are still not mainstream. I got to hear personal stories of the fights and challenges of people across the globe. That made me understand things so much better, and I became mentally and emotionally attached to the agenda I’m working on.

Through my page, I have also raised a sustained digital advocacy campaign against taxation of sanitary napkins, and one called #NotAskingForIt, against body-shaming, among other issues.

I have also founded and run a campaign called ungender. It is to break and shatter all the boxes, barriers, and shackles created around gender. It aims to address the issues of women as well as those in the LBTQ+ community, including problems of toxic masculinity. The most important underlying idea behind this campaign is intersectionality.

I still remember that one of the work criteria was that one had to be an adult. I was 17 then. I had quite casually filled in the application form and submitted it. After a two-step process, which involved a personal interview over the phone with the organization’s Gender Advocacy Lead, I realized I was one of the only two people who got selected from Calcutta. I was slightly overwhelmed back then. Right now, I feel humbled and fortunate to have experienced that.

I am also the Global Goodwill Ambassador from India for Postcards For Peace (PFP). PFP is a UK-registered charity foundation and peace organization that works to eliminate injustice, discrimination, and hate, in order to spread peace. They operate in every continent through their ambassadors.

I am a part of Breakthrough India’s Social Change Actors program and The Quint’s Me the Change campaign to encourage first-time women voters.

My two-year-old activism and advocacy work, at the age of 18, isn’t a tale of great things. It is a tale of tiny efforts and big dreams and a lot of hope. I have a long, long road ahead. But this is to remind all of you that I started my activism at 16, coming from the most favorable of circumstances. I didn’t have a story of struggle to tell the world. But I tried to be a medium for the stories of countless others.

Something crazy or sudden or drastic doesn’t have to lead you to start your big revolution. The smallest efforts count the most. It is important for young people to realize this every moment: While you are being reluctant or ignorant, there’s somebody facing injustice out there. So the least we can do is speak up and put forth our efforts in whatever way possible.

I’ll end with one of my favorite quotes by Audre Lorde: “I am not free while any woman is unfree, even when her shackles are very different from my own.” 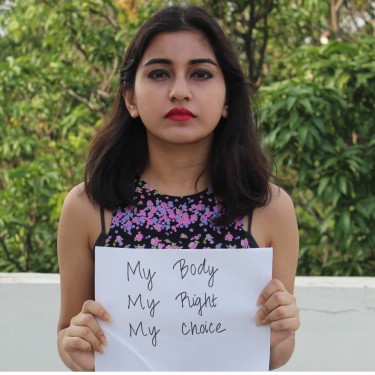 About the Author | Prakshi Saha

Prakshi is a blogger and gender rights activist. She has worked as a gender advocacy leader with women's rights organisations and championed for several campaigns. She believes in intersectional feminism.

0 comments to "Raising Your Voice"