The Story I Want You To Know

Many people who know me recognize me as a resilient woman with a lot of grit.

They describe me as inspiring, well spoken, and brave. I make them feel seen, and I do a great job at creating comfort in my relationships. I give love. I love hard. I love long.

Still, what most of my friends and family would be surprised to know is that I have a hard time receiving. I rarely allow in love, time, or affection from others. For many moons of my life, I felt broken. I felt broken because I carried stigma. I carried stigma because I was diagnosed with bipolar disorder, and I did
not tell anyone. I did not want to be abandoned.

These days, when most people reference mental health, they are often referring to gunmen. These perceptions of mental illness are extreme, and they pulled me deeper into secrecy. I understand now that my story does not have to be associated with other people’s assumptions. I am my own advocate, and I intend to tell my story.

Only I can tell it properly.

In the spring of 2015, I left my job at a little health food store in Brooklyn, New York, to pursue a profession as a middle-school English teacher. I was a teaching resident. My days were long and arduous. The mornings were spent teaching in the classroom, and the evenings were used to prepare for the next day’s tasks.

I was busy—and bit by bit, I stopped taking care of myself. It started with not refilling my medication. Then, my meditation practice ceased. I stopped talking to friends and didn’t call my mother as much.
Eventually, I was isolated.

On the surface, things seemed functional. I still showed up to work on time, but I was curt with the students. My patience grew thin. I told a resident manager that I was considering quitting because “church and state don’t mix.” I was odd.

Things may have gone differently had there been clear communication about my mental health. My employers would have been able to secure an action plan with me. My roommates at the time would have been able to help me see the symptoms of mania if they occurred. I would have had more support. Unfortunately, that was not the case, and my lack of self-care resulted in a hospital stay. As a result, I lost my job, my apartment, and many of my friends. I became depressed. I stopped looking people in the eye. I started to speak with less confidence. I began to overeat to suppress regret and shame.

Eventually, I relocated to Georgia to live with my mother and younger sister. My mother was gracious. She was patient because I spent one full year sitting on her couch, unemployed. As time passed, I reached an unhealthy weight of 423 pounds. My days were spent watching Keeping Up With the Kardashians and eating. I was ready to let my life slip away.

I may have done that, had it not been for a show called My 600-Pound Life. The show featured people who had gained significant amounts of weight and who were ready to change their circumstances. As I continued to watch the show, a question formed in my mind: Is this who you want to be?

I looked myself over. I had a bag of chips in my lap and the remote in my hand. I was down, but I knew that there was still an opportunity to move forward. The answer was no. That was not who I wanted to be—because who I was in that moment did not serve the world.

I made the decision in that moment to work towards a thriving life. After the decision, a series of events occurred. I met a nice person. We dated and moved back to New York City. I resumed my life in
the little health food store in Brooklyn.

It’s been a year, and it hasn’t been easy. Since returning to New York, I have lost over half of the 100 pounds that I’d gained before. I ran my first 5K in June of 2017. I have recommitted to using my story to help other people, and I am living with the awareness that in any given moment, life can thrive or decline. This perception encourages me to live with determination.

If you are reading this and you have a mental “illness,” I offer you support in releasing shame and stigma. I am grateful today to share my story, knowing that it may be helping someone else. I also hope that it addresses the need to smash stigma that causes diagnosed people to hide in the shadows of shame, because I want to be known fully.

My name is Brittany. I am a 32-year-old Black queer woman, and I have bipolar disorder. It’s
what I have. It’s not who I am. And that’s the story that I want you to know. 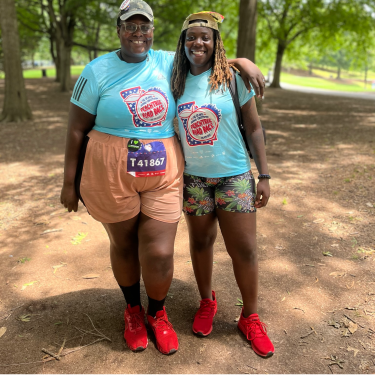 About the Author | Brittany Harden

Brittany Harden is a 32 year old Atlanta Georgia native who loves to write and inspire through writing. Brittany currently is pursuing her MBA at Herzing University and believes just like Herzing's slogan that nothing is impossible when one knows that I'm possible. Follow Brittany on Instagram @britt4point0.

4 comments to "The Story I Want You To Know"